Sponsor a Golden with Special Needs

Want to help the Goldens but can’t adopt or foster and don’t have time to volunteer? You can still contribute! Make a meaningful difference in the life of a golden in need by sponsoring a dog in our Golden Angel Program.

Each Golden that comes to Homeward Bound receives at a minimum, a vet exam, vaccinations, spay/neuter, heartworm test and treatment if needed to be ready for placement into a loving home. Some dogs require additional medical care, including hip surgeries, repairing broken bones, removing tumors, treating ear infections, ear surgeries, eye surgeries, knee surgeries, and a host of others. Our adoption fees don’t come close to covering the costs of this extensive medical care. Thus we rely on donations from our generous supporters. Some of these golden guests will stay with us for an extended period of time to recover, heal, gain strength and confidence before moving along to their forever homes. Some, because of their medical challenges, will become permanent Homeward Bound residents.

Pictured below are seven dogs with special needs that require extra care and attention. If you would like to help by sponsoring them, you’ll be making a big difference in their lives.

You can make a one-time or recurring donation of any amount via our secure online system PayPal, or personal check. Donations are tax deductible and will be a blessing for those Goldens who need a little extra care or time. 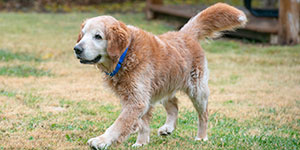 “We are from Paradise, CA and we are now homeless.” This is what Shane’s people wrote when they completed his surrender form after they lost their home in the devastating Camp Fire. At 12, this beautiful Golden boy was still full of life and love for kids, other dogs, and his humans. We promised to take good care of him and find him a loving home for the rest of his years. In his medical checkup, we noted a couple of masses on his body which looked suspiciously like hair follicle tumors. These are usually benign, but best removed immediately. Before the surgery, a potential adopter had already fallen in love. No surprise to us!

Shane’s potential adopter was planning to pick him up the next weekend when his sutures could be removed. And then we got unexpected bad news: one of Shane’s tumors was a rare malignant form of the Trichoepithelioma tumor. We called to deliver the bad news to the adopter, expecting that he might, understandably, change his mind. Instead, the only concern he expressed was about his ability to provide for future extraordinary medical expenses. We assured him that Shane would go home as a permanent foster, with Homeward Bound providing all of his medical care. His response: “Then, why wouldn’t I want him?”

We knew that Shane’s tumor, while removed, would likely reoccur with the risk that it could metastasize to his lymph nodes. But here we are at age 15 thanks to  regular veterinary care (and your help!). Shane is getting whiter of face and harder of hearing and sight, but we will remain there for him and his dad for as many days as they have together. 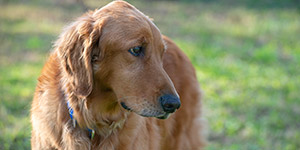 Raised from a pup, Rocky was a well-behaved, playful Golden boy, gentle with his young humans and a little confused about his size: he thought he was a lap dog! Over time, this handsome four-year-old developed hypothyroidism and seizures—and with the seizures, extreme separation anxiety. His behaviors changed. He did not want to be left alone; he began getting into things that he had previously ignored. His people tried a long list of medications and treatments to no avail and became increasingly concerned that his behaviors could impact the young humans in the home. Reluctantly, they surrendered Rocky to our care.

Our vet began by reevaluating all of his medications to get a clearer view of what course of treatment would give Rocky the best quality of life. A camera was placed in his kennel to monitor his seizures and help the vet understand the pattern and severity. Meanwhile, our volunteers loved him, providing the socialization and emotional support he needed. With a manageable plan in place he was able to be adopted to someone who understands how to manage the seizures when they do occur. Homeward Bound ensures his medical care for life. Thanks to the support of people like you, Rocky receives the care he needs so he can be home. 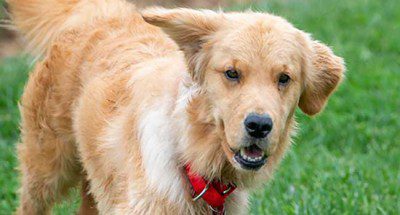 Bonnie was surrendered at one year of age by her owner early in 2020. She had been diagnosed with an ectopic ureter and inverted vulva, which could only be corrected through a complicated and expensive surgery at U.C Davis. The procedure provided Bonnie with an artificial urethral sphincter (hydraulic occluder) and required her to given round-the-clock care for six months following surgery. Once her body healed around the occluder, she needed to undergo another procedure which would eventually end her urine leaking problem. In the second treatment, Bonnie’s occluder was filled with fluid requiring another 12 months of necessary monitoring and adjustments to fluid levels.

Bonnie’s first surgery, which was delayed by COVID, was performed in July 2020. She required round-the-clock injections. That’s when one of our dedicated volunteers stepped in. The plan was to nurse Bonnie back to health and return her to Homeward Bound ready for adoption. It didn’t take long for Bonnie to pull at the family’s heartstrings; she now resides as a permanent member of the family with her current and future medical needs provided by Homeward Bound – thanks to you. 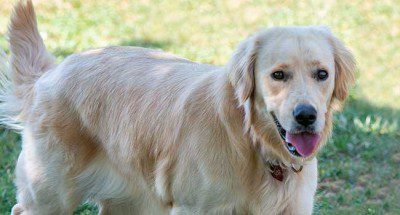 Laila came to us by way of another rescue that was not able to meet her medical needs. She was born with Hydrocephalus (water on the brain), is mostly blind and arrived heavily dosed with prednisone. We gradually weaned her from the drug but found, through a series of fosters, that she had ongoing accidents in the home. These were not medically caused, but a result of the Hydrocephalus. Full of life and joy, Laila is likely to have additional behavioral and medical needs as she ages.

It took three fosters, but Laila found her forever home. Her new mom has a huge heart for special needs dogs and has welcomed a long list of hospice patients into her home. With Laila, and her one-eyed young Homeward Bound alum, Gabby, their home is rocking with raucous joy and play…and a little pee! Laila can be home as part of our permanent foster program; Mom provides the love…we provide Laila’s medical care for life – thanks to you. 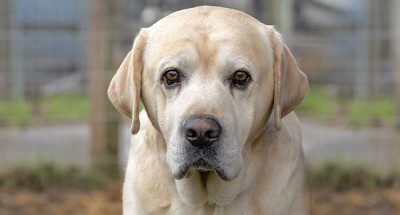 Mishka had been surrendered to a shelter, pulled by another rescue, and then transferred to us. At only five years of age, he was lethargic and almost vegetative. His expression was blank. Bloodwork and a urine test confirmed diabetes requiring twice daily insulin shots. Giving insulin is not difficult, but many adopters would be apprehensive – not only of the procedure and the need to attend to the need twice a day, every day – but also about the cost. Thankfully for Mishka, previous adopters stepped forward with a long history of taking care of senior and special needs dogs – and with a special love of Labs.

Mishka’s glucose level has stabilized and his bloodwork looks terrific. He is a different dog with much more energy. One person’s castaway is another’s treasure. Miska will live a full and happy life with his new family with his medical needs provided by Homeward Bound. Thank you for supporting this sweet boy’s second chapter. 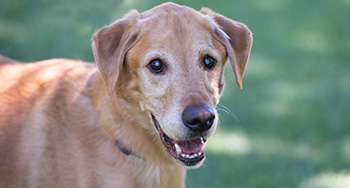 Cooper came to Homeward Bound as a puppy named Capone in 2016. He was returned because everything changed for him and his family. Cooper developed insulin-dependent diabetes and cataracts that left him nearly blind. His family could not provide the support that he needed and – in keeping with our lifelong commitment to the dogs – he was returned to us so we could find him a better equipped home. He found that with his permanent foster family who carefully controlled his diet and monitored his diabetes. He will remain on insulin the rest of his life which Homeward Bound will provide, but their diligence paid off for Cooper. He was recently qualified for and underwent successful cataract surgery. Cooper’s vision and world have been returned to him and he and his foster family are forever grateful. As are we! 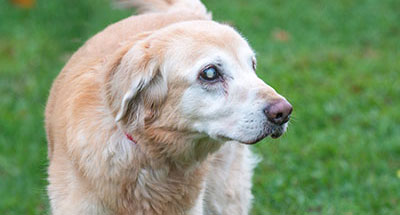 Kodos – now Murphy – arrived arrived in 2019. Glaucoma had made him completely blind in one eye and he was losing sight in the other. Always an integral part of the family, he loved to cuddle and be by his humans’ side. But things changed with the arrival of a toddler and newborn. Because of his challenged vision, he was easily startled by the running child and largely ignored amid the chaos of a newborn in the home. For his safety and the children’s, the family had taken to crating him most of the time, but they knew he deserved better. They surrendered him at the age of six. He remained with us for several months waiting for the right match. When our applicant appeared with a preference for dog who loved cuddling and gentle walks, we knew we had found her. We sent him home as a permanent foster so we could cover the cost of the expensive eye drops he would need lifelong to reduce the pressure in his eyes. Now nine, he has also gone deaf. His mom guides him through life, while we ensure his medical care – thanks to you.

To make a general one-time or recurring donation to the Golden Angel Fund, simply:  click on this link.

If you prefer to send a check, please make it payable to: Homeward Bound Golden Retriever Rescue and mail it to the address below, including a note about the dog or dogs you wish to sponsor. Thank you!